The Alabama Hills Stewardship Group, Inc. (AHSG) is a local group of Owens Valley community leaders who have partnered with the Bureau of Land Management over the last 10 years to help direct the management of this Special Recreation Area called the Alabama Hills. The goal is to make the Alabama Hills as accessible and activity inclusive as possible, while still preserving the semi-primitive and scenic landscape.

The AHSG is committed to protecting the jaw-dropping beauty of this area with continued access for hikers, motorists, photographers and rock climbers, while allowing important economic activities like commercial filming, cattle grazing, hunting/fishing and recreation to continue. Balancing all these needs is what makes the Alabama Hills so special to so many people and necessitates its protection. The AHSG, with support from dozens of local stakeholder groups, are promoting the effort to elevate the status of the Alabama Hills to a National Scenic Area.

-The Alabama Hills in Inyo County, California, contain nationally significant scenic, geological, cultural, recreational, biological, educational and scientific values. They are a uniquely weathered granitic boulder landscape at the foot of the High Sierra (and Mt. Whitney, the highest mountain in the lower 48 states).

-The Alabama Hills rise from the desert and provide a scenic backdrop for the community of Lone Pine, California. For thousands of years, the area has been continually used for subsistence, habitation and ceremonial purposes by the indigenous people known today as the Lone Pine Paiute-Shoshone Tribe. The Alabama Hills have inspired photographers Edward Weston, Ansel Adams and David Muench. Nearly 100 years of film history exists in the Alabama Hills from silent movies to state-of- the-art motion pictures such as Gunga Din, How the West Was Won and recently Ironman. Promotional product commercial filming crews work here regularly. The Jim and Beverly Rogers Film History Museum in Lone Pine, visited by thousands of people each year, contains extensive film history displays featuring the Alabama Hills.

Since the early 1920s, famous movie stars like Hopalong Cassidy, Gene Autry and the Lone Ranger have been shooting it out at Alabama Hills. In 1969, the BLM dedicated nearly 30,000 acres of public land west of Lone Pine, California, as the Alabama Hills Recreation Area. The rounded, oddly shaped contours of the Alabama Hills form a sharp contrast to the glacially chiseled ridges of the nearby Sierra Nevada. Both landforms consist of a similar granitic rock that was uplifted around 100 million years ago.

The Alabama Hills lie west of Death Valley National Park, so it’s an easy trip for park visitors. And the Alabama Hills also lie at the base of Mount Whitney, the highest peak in the lower 48, which adds to the spectacular landscape. The BLM and the Alabama Hills Stewardship Group care for this area with the goal of preserving the hills in as close as natural state as possible for the enjoyment of future generations. 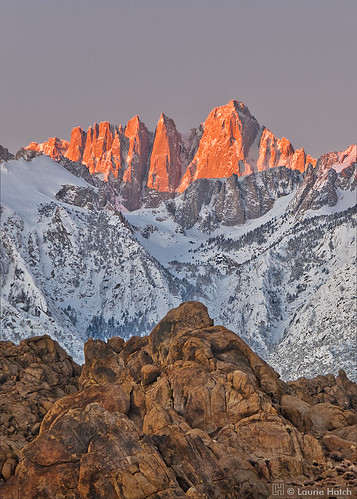