Executive summary
In the past 5 years (2011–16), environmental policies and management practices in Australia have achieved improvements in the state and trends of parts of the Australian environment. Australia’s built environment, natural and cultural heritage, and marine and Antarctic environments are generally in good condition.

There are, however, areas where the condition of the environment is poor and/or deteriorating. These include the more populated coastal areas and some of the growth areas within urban environments, where human pressure is greatest (particularly in south-eastern Australia); and the extensive land-use zone of Australia, where grazing is considered a major threat to biodiversity.In Australia, the key drivers of environmental change are population growth and economic activity. The extent to which these drivers lead to environmental impacts depends on a range of factors, including:

Keeping impacts within limits is one key to a sustainable future.If not managed well, drivers can generate pressures that have immediate and long-term negative consequences for the environment. If managed well, however, drivers can be harnessed to achieve environmental benefits.The main pressures facing the Australian environment today are the same as in 2011: climate change, land-use change, habitat fragmentation and degradation, and invasive species. In addition, the interactions between these and other pressures are resulting in cumulative impacts, amplifying the threats faced by the Australian environment.Evidence shows that some individual pressures on the environment have decreased since 2011, such as those associated with air quality, poor agricultural practices, commercial fishing, and oil and gas exploration and production in Australia’s marine environment.During the same time, however, other pressures have increased—for example, those associated with coal mining and the coal-seam gas industry, habitat fragmentation and degradation, invasive species, litter in our coastal and marine environments, and greater traffic volumes in our capital cities.

For some parts of the Australian environment, at least, effective policy and management have contributed to improved outcomes for the environment and for people. For example, early indications are that environmental watering in the Murray–Darling Basin driven by the 2012 Murray–Darling Basin Plan, along with the effects of natural floods, have contributed to ecological benefits for stream functioning and biodiversity. In the marine environment, the formation of the National Offshore Petroleum Safety and Environmental Management Authority in 2012 has increased scrutiny of offshore petroleum environmental management. This has resulted in better understanding of activity impacts, greater focus on industry compliance and increased levels of preparedness for unplanned events.However, a number of key challenges to the effective management of the Australian environment remain: 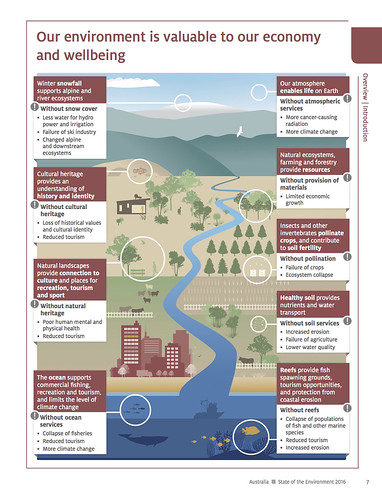 Australia State of Environment 2016: A snapshot of Australia's biodiversity in pictures https://t.co/XkfMWqVaBm pic.twitter.com/bDvmsob3OI

Australia State of the Environment 2016: an interview with Dr Melita Keywood, an author of the atmosphere chapter https://t.co/RYkEq7btEJ pic.twitter.com/7V2J6ixcMb

Australia State of the Environment 2016: Dr Karen Evans discusses reporting on the state of the marine environment https://t.co/xtIvipngOg pic.twitter.com/OuvolpSxC6