Recommended Listening
Iconic Buildings: Sagrada Familia – One of Spain’s most infamous buildings – is it a folly or a work of genius?
https://en.wikipedia.org/wiki/Sagrada_Fam%C3%ADlia

Essay
As the country’s main industrial city, Barcelona (1.8 million inhabitants) is surrounded by an industrial metropolis home to about 3.5 milion people. Located at the North East part of Spain is only 100 miles from the French border and has the most important harbour in Spain and one of the biggest in Europe. In Barcelona start the majority of cruises in the Mediterranean. El Prat is the airport of Barcelona (10 miles away) used by more than 33 million passengers a year (2007).

Natural World
Barcelona has a privileged position by the coast. The weather in Barcelona is mild and temperatures go from 10 – 15 ºC in the Winter to 30 – 32 ºC in the Summer. Along the coast line and a few miles in the land, a coastal mountain range runs parallel to the coast and provides rain and green vegetation to the region. Only 100 – 150 miles from Barcelona, the Pyrenees, the biggest mountain range of Spain, offer wonderful resources for walking, skiing and ecotourism to the people from Barcelona and their visitors.

The Metropolitan Area of Barcelona has a central park – Parc de Collserola , an urban lung, with more than 8,000 hectares of wood and green areas.

North and south from Barcelona, two rivers provide water to the city (Besos and Llobregat)

Beside the airport of el Prat, the mouth of river Llobregat is a natural reserve, but the most important natural protected areas close to the city are Delta de l’Ebro, National park of Aigüestortes and estany de Sant Maurici, Empordà marshes and Montseny Park.

Only 30 miles from Barcelona, the Mountain of Montserrat (sawed mountain in Catalan) is also a natural park with a very special shape becomes the visit of more than 1 million pilgrims that go to the Monastery where the “black virgin” of Montserrat has its seat. It is worth also to walk through the paths and enjoy the wonderful views over the region of Llobregat river and to the Pyrenees.

Bikes
Bicing (pronounced Bee-sing) bicycles are firetruck red and chalk white. The squat cycles were designed not for looks, but to hold up under heavy use. When bicycle sharing fails

Cultural World
The tradition of Barcelona and it’s geographical privileged position, have been crucial for the cultural development and creativity of the people living in the city. It also has attracted lots of artists from all over the world to develop their art in a city where communication and knowledge exchange is an important element in the way of life.

Excellent schools of art, the first opera house in Spain, the most important art movements of modern times, have found in Barcelona their seat. The different migrations from Southern France (19th century, from rural Spain, beginning and mid 20th century, and the last migration, from Northern Africa, Central and South America, and Asia have made from Barcelona a melting pot of cultures where artists feel freedom for creativity.

The shape of the city has also benefited from the different art movements, the Example, a quarter designed by Ildefons Cerdà in the 19th century, with a network of streets in square distribution, occupies the 60% of the central city and has a strong influence in the commerce and architecture of Barcelona.

The Passeig de Gràcia, a large avenue, that has a small reminiscence to the Champs Elisées of Paris, is the seat of the most luxurious shops in Barcelona. Around Passeig de Gracia and in the neighbour streets, tourists like to enjoy the biggest representation of Modernisme architecture (the Catalan version of French’s Art Nouveau, a Catalan personal style fostered by the “bourgeoisie” of Barcelona in the 19th and beginning of the 20th century).

Barcelona has the first Museum dedicated to Pablo Picasso, with works given by the painter friends and his family. The Picasso Museum of Barcelona is one of the most visited in the city, and it’s seat covers 3 palaces in the famous medieval Montcada street, in the Old Town. Near by you can reach the church of Santa Maria del Mar, and also the former artisans quarter of the old city. After crossing the Via Lietana, built to connect the harbour with the city of the 19th century, you reach the political center of Catalonia and Barcelona, the Plaça de Sant Jaume with the Palace of the autonomous government Generalitat de Catalunya, opposite to the Town hall, with its unique Saló de Cent, older seat of the medieval government of the city. Between Plaça Sant Jaume and Avinguda de la Catedral, you can enjoy the streets of the medieval Barri Gotic, where you will find the columns of the Roman Temple to Augustus and the streets of the old Roman Town, in the underground.

The Park of Montjuic is on a hill beside the city center, with lots of cultural venues like the MNAC (National Art Museum of Catalonia), with the biggest collection of middle Age art of Europe; the Joan Miro Foundation, a modern art museum with temporary exhibitions and a collection of Joan Miro’s works, the Poble Espanyol, am architecture museum, with famous buildings of the different Spanish regions reproduced on scale, the Ethnologic Museum, with a very important collection of Amerindian culture, the Olympic Museu, of the 1992 Barcelona Olympic Games, Caixa Forum, with temporary exhibitions and the Archeological Museum, with works from the ancient times of Catalonia.

If you like the music, Barcelona is one of the most active cities in Europe, with daily concerts at the Auditori, the Palau de la Música, for classical music,; el Liceu,for the Opera, Razzmatazz, Luz de Gas, Sala Apolo, Jamboree, Bikini for modern music and Jazz. There are also musicals at the Barcelona musical theater and at the Tivoli Theater. Every night you can listen to music at the many musical bars around the city.

Most of the theater played in Barcelona is in Catalan language, but also in Spanish, and many international theater copanies play in Barcelona for some weeks too. The main theaters are: Theatre Nacional, Teatre Romea, Teatre Poliorama, Teatre Victòria, Teatre Borras, Teatre Condal, Mercat de les Flors, and the more alternative Sala Villarroel, Sala Becket, TeatreNeu.

You can watch movies in their own language in many cinemas: Cinemes Verdi and Verdi Park, Cines Casablanca, Cines Renoir, Cinema Boliche and Cinemes Alexandra.

Barcelona is the most preferred city for European Students to have an Erasmus scholarship. Thus you can find young students from all over Europe having fun in the pubs and bars every night in the city center. Universities teach indistinctly in Catalan and Spanish and increasingly in English too.

The main language and the first official one in Barcelona is Catalan, that has been official language in Catalonia since the 11th century, but also Spanish is spoken bay every citizen, which is the co-official language in Catalonia, together with Catalan. Due to the late immigration and the cosmopolitan condition of Barcelona, a recent study showed that in city there are spoken over 230 languages. Thus it is not strange to find people from other cultures celebrating their festivities on the street. The largest communities living in Barcelona, a part from Europeans, are: Moroccan, Ecuador, Pakistan, China and the Philippines.

In 1137, the count of Barcelona Ramon Berenguer IV married the daughter of the King of Aragon and tied the city of Barcelona to this Kingdom that became in the Middle Age the most powerful in the Mediterranean, especially after the conquest of the Balearic Islansd (1228), Valencia, (1232) and Sicily in Italy (1282) by the King James I.

After the union of the Kingdoms of Castilla and Aragon with the marriages of Queen Isabel and King Fernando, Barcelona did not benefit from the discovering of America by Columbus and only 3 centuries later (18th century) the Catalan ports could have commerce with America.

The Spanish Succession War (1705 – 1712) and the previous (1640 – 1652) Guerra dels Segadors (War of the reapers) brought a long period of sufferance and pain for Catalonia and Barcelona that finished with the surrender of September 11, 1714, that remains today as the National Catalan Day, in homage to the heroes who died in this war.

After 1725 the city was starting a new flourishing period with some important events: 1888 the World Exhibition, 1929, the International Exhibition, 1992, the Olympic Games and 2004, the Universal Forum of Cultures. In between Barcelona suffered dictatorships (Primo de Rivera, from 1923 until 1931, and Franco, 1939 until 1975) but also flourishing periodes where culture, freedom and creativity have been the identity of the city.

Currency
The currency in Spain is the EURO (€). A currency calculator can be found online at www.xe.com Elsewhere on the Web
Parcs of Catalonia (official site of Catalan Government)
http://www.hiddencitytours.com

Tourism in the city of Barcelona (Official site)
http://www.bcn.es/turisme/english/turisme/welcome.htm

Other biking services in Barcelona:
http://www.bikinginbarcelona.net/english/biking-in-barcelona-by-biciclot

Discovering Barcelona through the videos (in catalan)
http://www.tv3.cat/ptv3/tv3TotsVideos.jsp?idint=203744619 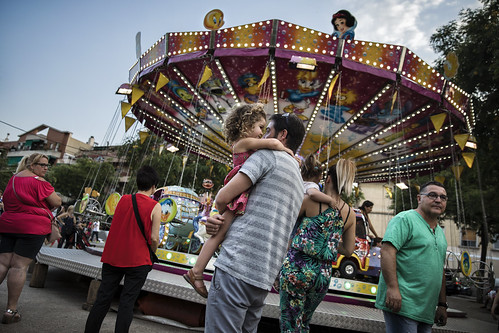