It is easy to see the sharp contrast between the greenery of Chapultepec Park and the surrounding gray megalopolis. This is one of the most impressive city parks in the world.

Green Spaces
Long before urban sprawl crept to the borders, the park was a refuge of the kings of the Aztec Empire. Cerro de Chapultepec (Grasshopper Hill) was the first nature reserve in the Americas, created in the 1420s. It boasted botanical gardens, zoos, and aviaries. Critically, it provided drinking water for the Aztec capital of Tenochtitlán.

There never seems to be a time when the 1,655 hectare park could be considered empty. On weekends and holidays today Mexican families picnic on the expansive green lawns.

The park is home to a zoo, a children’s museum, and a small lake with rowboats for rent.

Eating and Drinking in the Park
There are hundreds of venders who sell snacks (antojitos), including fresh fruit, fried empanadas — pastries stuffed with meat and vegetables and huaraches, thick tortillas topped with cheese and salsa.

Zoo
Chapultepec Zoo was founded in 1923 by a biologist who loosely modeled it after the zoo in Rome. In the late 1990s the park underwent major renovation, improving the habitat for the animals. There is a large aviary with a wide array of birds, an elaborate reptile house and representations of several ecosystems including deserts and tropical jungles. The zoo is one of the few in the world in which a panda has been born in captivity.

Chapultepec Zoo is located in the first section of the park, just off Reforma and across from the Museum of Anthropology. The zoo is open Tuesdays to Sundays from 9am – 4pm. Be aware of the early closing hour and give yourself a few hours to enjoy the visit. The closest metro is Auditorio, though it’s a pleasant walk through the park if you enter from the Chaputepec metro. Entrance is free and maps are available for a small charge.

Museums
The Museo Nacional de Antropología (National Museum of Anthropology) is an absolute must-see, combining anthropological studies of Mexico’s indigenous groups with a mind-bending collection of artifacts produced over the past 3,000 years. This is one of the world’s top museums. Mexico’s cultural diversity and artistic genius are showcased in 23 exhibition halls that occupy more than 44,000 square feet.

The museum is divided in two levels. The downstairs is devoted to archaeology and the upstairs puts the spotlight on anthropology and features exhibits depicting contemporary indigenous cultures. It’s important to note that some of the most popular galleries are closed for renovation.

Please note that the official brochure and guidebook are several years old and do not correspond with the current design. For an interesting take on the design of the museum, read this essay by anthropologist Melissa Biggs.

It’s easy to wander the museum yourself or you can take a guided tour. Licensed guides wait outside the museum and can be hired for small group tours. The museum itself provides free tours — just ask when you buy your ticket. The museum is wheelchair-friendly. There is a café on the lower level, where you can boost your caffeine and blood sugar.

Children’s Museum
El Papalote (The Kite), is one of the best children’s museums in the world. Floor-to-ceiling displays include a rain forest tree, a five-story maze, and interactive games. All of these exhibits are labeled in Spanish. There’s an IMAX movie theater, a patio court and gift store.

The museum is located at Avenida Consitituyentes #268 in the second section of Chapultepec Park. Unless you know your way around the park, Papalote is fairly well hidden. It’s not within easy walking distance of a metro, so if you don’t have your own car, taking a taxi is advisable. The museum is open Tuesdays to Sundays and is open in shifts from 10am to 2pm and from 3pm to 7pm. Tickets are good for the specific time period, not the entire day.

Cárcamo
Near the museum are several water-inspired sculptures, including a beautiful fountain of the Aztec rain god Tlaloc designed by Diego Rivera. The Cárcamo was inaugurated in 1951 as a water distribution system. What remains are the murals and the Moorish looking towers that provided ventilation for the giant water tanks. The serpentine sculptures are amazing.
Flickr 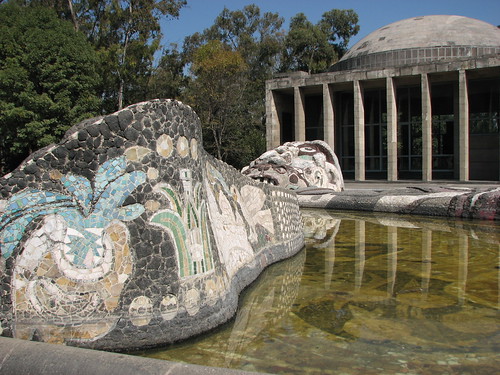 Hands down best spot in Chapultepec, (willing to argue over this.) pic.twitter.com/DalBQzevsO

Outside Anthropology Museum (@mna_inah) you can find the Voladores de Papantla! Don't miss the chance to see them pic.twitter.com/mXGZDGJBGW