Headlines
The art of noticing: five ways to experience a city differently
Four principles for the future of city streets – Medium
https://www.washingtonpost.com/video/postlive/transformers-cities-connecting-local-governments-with-citizens-and-their-cities/2017/11/14/596ef9ee-c956-11e7-b506-8a10ed11ecf5_video.html
https://www.theguardian.com/cities/2017/jul/03/which-worlds-most-biodiverse-city-extreme-cities
https://theconversation.com/go-native-why-we-need-wildlife-allotments-to-bring-species-back-to-the-burbs-69631
http://www.thenatureofcities.com/2015/06/14/how-can-we-engage-residents-to-conserve-urban-biodiversity-talk-to-them
http://www.accorhotels-group.com/en/news/urban-ecotourism-greening-cities.html
http://www.nationalgeographic.com/magazine/2016/04/nature-urban-national-parks
http://news.wtmlondon.com/blog/responsible-tourism/how-can-cities-meet-the-needs-of-locals-and-tourists
http://safecities.economist.com/wp-content/uploads/2015/01/EIU_Safe_Cities_Index_2015_white_paper-1.pdf (PDF)
The 10 worst city tourism videos
The Rise of the ‘Free’ City Tour – @vickybaker
The secrets of the world’s happiest cities
How well do cities use the social web?
Crowd-Sourced Sightseeing
Ciudades no sostenibles

Why aren’t we living in sustainable cities?
Blue sky thinking is a feature of much discussion around the future of our cities — but will it really help us create the sustainable cities of the next century? This talk was recorded at an Ockham’s Razor Live event as part of the the World Science Festival Brisbane 2019. Tony Matthews, Senior Lecturer, Urban and Environmental Planning, Griffith University

Medio Ambiente y Urbanización is an open access Journal. It was founded in 1983 to encourage researchers, NGO staff and other professionals to write about their work and to exchange ideas. An English language sister journal, Environment and Urbanization was set up in 1989. The two journals have similar editorial policies and some shared content – with Medio Ambiente y Urbanización focusing mainly on Latin America while Environment and Urbanization covers all regions of the world.

Questions
Where can I find your information stands and kiosks?
Where can one travel on public transport within an hour of the city?
Where can one rent a bicycle?
Do you have a city guide available for my smartphone?
Bioregional focus – Where does the water come from? What is the water supply?

Developers on the whole tend to look at success modeled in other cities and then import them rather than trying to figure out something fresh that makes sense for their particular situation. You really have to look at the local conditions and ask what makes sense in terms of quality of life.
– Arizona State University design professor John Meunier , Urban Planning and Climate Change

China, like several other countries, is exploring the creation of sustainable urban areas, or “ecocities” as they are known. Around the world, ecocities are beginning to emerge from the drawing board, from Masdar City in Abu Dhabi to PlanIT Valley in Portugal. Aimed at being the world’s largest of its type, Tianjin Eco-city is a collaborative project between the Chinese and Singaporean government that will house 350,000 people in a low-carbon, green environment around half the size of Manhattan by 2020. All going well, the team hope its model for building a sustainable city will provide the blueprint for future urbanization efforts in China, and other countries.
China’s eco-cities: Sustainable urban living in Tianjin

Recommended listening
The power of the city – Would we be better served by refocusing our social, political and economic energies toward the city, rather than the nation?

Rewriting the Book? – RSA hosts a discussion on the ways that city regeneration can enhance economic competitiveness, community cohesion and a sense of place. We bring together an expert panel to discuss the regenerative potential of large culture-led development schemes. What are the key drivers of social renewal and the development of enterprise and how can cities ensure transformational change is community-driven, allowing greater local ownership and participation?

The importance of parks – How far would you have to walk from where you are now to get to the nearest park? And when you got there what type of experience would that open public space afford you?

Psychogeography: discovering the mental terrain of the city – Take in the smells and sounds of back alleys, recall emotional memories and join us on a ‘psychogeographical’ adventure, and discover the impact of the city on your psyche.

Cities – RadioLab – There’s no scientific metric for measuring a city’s personality. But step out on the sidewalk, and you can see and feel it. Two physicists explain one tidy mathematical formula that they believe holds the key to what drives a city.

Green Cities – By 2030, two-thirds of the world’s population will be living in cities. How do we build green cities and overcome the barriers to sustainable urban design?

The value of green space – As our cities continue to spread there’s increasing pressure on the number of parks and other green spaces. But what are the benefits of urban green spaces when it comes to biodiversity? And what impact do they have on our physical and mental health?

Boom cities of Asia – Competition to achieve global city status has had a profound effect on many booming Asian cities including Tokyo, Singapore, Hong Kong, Seoul, Bangkok, Kuala Lumpur and Shanghai. But how resilient are these cities to the risks they face? How can they manage continuing pressures for development and growth while reducing their vulnerability to a range of potential crises?

Cities – One of the popular themes at this year’s Adelaide Festival of Ideas was Architecture, Planning and Urban Design. The issue of what to do with our urban environments to cater for increasing populations and the need to reduce our cities’ carbon footprints is one that’s been talked about for years and will be discussed into the future.

Living in the city – Architects working in Australia and China explore how our cities can be better designed.

Urban Planning and Climate Change – Urban planners are considering how to build city infrastructures that would run on limited resources.

Videos
GoMA TALKS What makes up a 21st century city and are there any boundaries? – Hosted by Alan Saunders

Recommended Reading
The Urban Agenda – An overview of the international urban debate since 1976 by Daniel Biau, a UN manager and expert who has been part of the process along the way. “Contrary to a prevalent view, the urbanization process of the developing world has been less chaotic than expected by the media. Many countries are managing their urban development relatively well, particularly in Asia, the Arab States and Latin America…the urbanization of our planet should not be seen as an outright disaster. It has both positive and negative features. The United Nations has always stressed the negative to raise awareness while not placing enough emphasis on the positive role of cities, including their impact on rural development…This article seeks to redress this imbalance.”

Cities and Biodiversity
What role do you think cities can play in sustaining biodiversity? asks @livingcity2014

Cities play a critical role in sustaining biodiversity, through specific conservation efforts as well as public education and engagement with surrounding rural areas.

City parks are the easiest venues by which to commune with the natural world and with a mix of locals and visitors. Think of the ‘tourist attraction’ that is Central Park in New York City, Barton Creek in Austin, the Viveros Garden in Mexico City, Yamuna Biodiversity Park in Dehli and the Royal Botanic Gardens in Sydney.

Urban gardens and markets are taking center stage around the world. In Oaxaca the Pochote Market brings farmers and cooks together on weekends.
In Cape Town Market Day at the Oranjezicht City Farm takes place Saturdays.

Cycling
Walk and Bike for Life 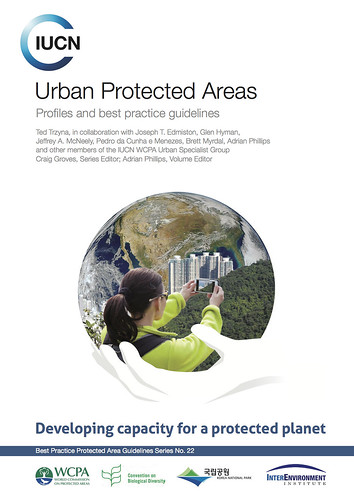 PARK(ing) Day
PARK(ing) Day is an annual, worldwide event on September 17 that inspires city dwellers everywhere to transform metered parking spots into temporary parks for the public good. PARK(ing) Day was started by some San Francisco basket weavers back in 2005 to call attention to the lack of green space in their city.

September 20 TEDCity 2.0commences at the TimesCenter in New York City from 9am-5pm EST. Co-curated and co-hosted by Chris Anderson, John Cary, and Courtney Martin, the event surfaces stories of urban ingenuity and interdependence from across the globe, and features an unexpected mix of over 20 speakers. Live-streamed for free, the TEDCity2.0 anchor event will coincide with self organized TEDxCity2.0 events over a 48-hour period. TEDx communities worldwide will envision the cities of our future and share big ideas about collaborative action and sustainable solutions.
http://www.thecity2.org/about
http://www.ted.com/pages/tedx_tedxcity
http://www.ted.com/pages/attend_tedcity2
Satellite Events
@TEDCity2_0
https://www.facebook.com/thecity2.0

City Biodiversity Summit 2010 took place concurrently with the 10th Conference of the Parties to the Convention on Biological Diversity (CBD COP 10) October 24 – 26. Local authorities from around the world exchanged information of biodiversity-related issues and problems in their respective communities and best practice cases for use in their community development.

Transition Towns
Transition Towns is an amazing movement that brings communities together to build local ecological resilience. Communities are encouraged to seek out methods for reducing energy use as well as reducing their reliance on fossil fuels. They do this in communities locally, and make friends and have a drink and enjoy their lives while they’re doing it.

England
Sustainable Urban Fringes (SURF) brings together partners and experts from across the North Sea Region to exchange information and develop a common approach towards the sustainability of urban fringe areas.

We are going to have to raise more food closer to where we live. The age of the 3,000-mile Cesar Salad is coming to an end.

We are sleep walking into the future.

Life is going to be about living locally. Be prepared to be good neighbors.

Please stop referring to yourselves as consumers. Consumers are different than citizens. Consumers do not have obligations, responsibilities and duties to their fellow human beings. As long as you are using the word ‘consumer’ in the public discussion you are degrading the discussion we are having and we are going to continue being clueless.