citizen journalism = the collection, dissemination, and analysis of news and information by the general public, especially by means of the Internet

Recommended Listening
Making journalism public – Veteran US journalists Jay Rosen and John B. Judis discuss how the recent US shutdown augers for the future of both political parties, as well as a look at the role of citizen journalism, and how the media can serve the public interest when the public themselves are now becoming involved in the media.

Skyful of Lies’ and Black Swans
BBC Presenter Nik Gowing has carried out a study titled ‘Skyful of Lies’ and Black Swans in which he investigates how changes to technology is making institutions of power, from the media to government, more vulnerable. The study highlights how in a moment of major, unexpected crisis the institutions of power – whether political, governmental, military or corporate – face a new, acute vulnerability of both their influence and effectiveness.
Late Night Live – @LNLonRN
The new tyranny of shifting information power in crises
reutersinstitute.politics.ox.ac.uk/publication/skyful-lie…
PDF 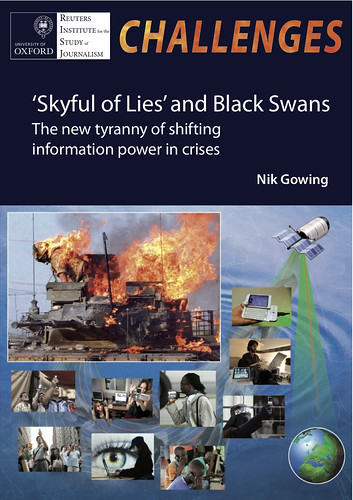 What is the Social Web?