Crowdsourcing = Content developed by a group of people or community

This page examines how crowdsourcing works (or fails to work) in travel and tourism with focal points on museums, markets, parks and protected areas. This is an early draft and suggestions are welcome.

Essay
Ron Mader: Tourism promotion already is catalyzed by the ever curious crowd. The source for our tips for Oaxaca come from good friends and passionate strangers, some knowingly, others not, how their tips and recommendations, their photos and status update from daily life — these views are read by us, good friends and random strangers.

Crowdsourcing is content developed by a group of people or community. This is the foundation for websites including TripAdvisor and Wikipedia. It works as well as we want. The advantage is that locals and visitors have greater opportunities to connect and correct.

Can social web channels be manipulated? Certainly. But they can also be more accurate than other sources, including dead tree guidebooks and encyclopedias.

No one is suggesting an all or nothing scenario in which travelers only have access to dead tree guidebooks or smartphone apps.

We see examples of official and independent photography groups (see below) that solicit images of particular places.

Criticisms
Critics dismiss crowdsourcing as “unreliable content aggregated from dubious sources.” And it’s understandable that if the input is questionable, the output is garbage. But what if the process were structured in a way to be more reliable, to solicit trustworthy sources?

Recommended Listening
Crowdsourcing – Crowdsourcing draws on the wisdom of ‘the crowd.’ Wikipedia has created an invaluable online reference resource based on it. The Oxford English Dictionary may well be an early example of this form of open outsourcing. How do we best harness the ideas and energy of the ‘crowd’ — for innovation, political reform, commerce and more?

Crowdsourcing ideas and active collaboration is the fastest, most effective way to nurture innovation.
– Aleem Walji, Inspired to Fight Poverty

Questions
Can tourism promotion be crowdsourced? 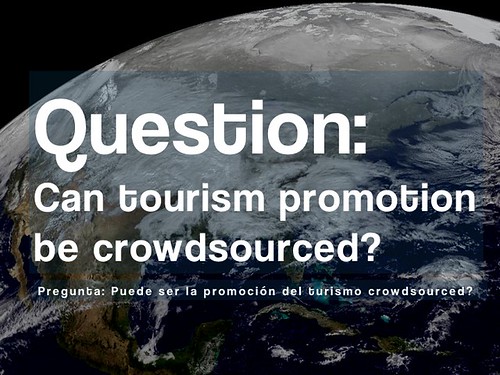 The Value of Collaboration