Quotes
I may not have gone where I intended to go, but I think I have ended up where I needed to be.

I love deadlines. I like the whooshing sound they make as they fly by.

I’ve come up with a set of rules that describe our reactions to technologies:
1. Anything that is in the world when you’re born is normal and ordinary and is just a natural part of the way the world works.
2. Anything that’s invented between when you’re fifteen and thirty-five is new and exciting and revolutionary and you can probably get a career in it.
3. Anything invented after you’re thirty-five is against the natural order of things.
– The Salmon of Doubt 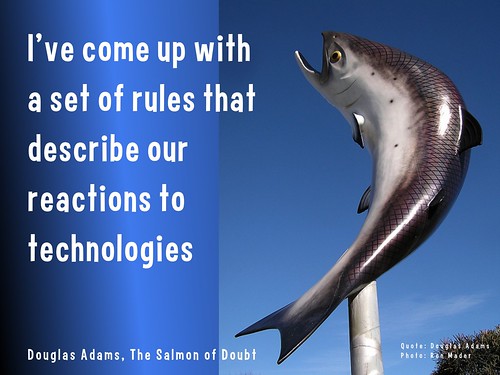 Elsewhere on the Web
Did Douglas get it right?