Definitions
Ecotourism is defined by its lack of definition. There is no consensus, no brand. As there has been no agreement on a standard definition, the important question is … does that matter?

Ecotourism is overreaching at its finest and calls upon inter-sectoral alliances and respect among a mix of stakeholders.

Imagine these goals as three overlapping circles. If a project or service met all three criteria, it would hit the bull’s eye. To use another sports term, it’s akin to scoring a hat trick.

This three circle model illuminates not only what is ecotourism, but what can become ecotourism. If tourism aspires toward being ecotourism, this model allows players to figure out how to collaborate and share individual and collective strengths.

While the details vary, most definitions of ecotourism boil down to a special form of tourism that meets three criteria:
1) it provides for environmental conservation
2) it includes meaningful community participation
3) it is profitable and can be self-sustaining

This model is similar to the idea behind ‘triple bottom line’ but frankly, we think the term makes ecotourism a tool of the accountants, rather than that of entrepreneurs.

Let’s give credit where it’s due. Mexican architect Hector Ceballos-Lascurain coined the word and has been its most indefatigable supporter.

The Decline
During this time …. we’ve been tracking a decline… Can ecotourism get its groove back?
http://www.google.com/insights/search/#q=ecotourism&cmpt=q

Ecotourism Associations around the World Quotes
“What is ecotourism? – An Innovative Tool to Promote the Conservation of Wild Areas. Often misused as a catch phrase describing nature travel, ecotourism actually represents a means of protection for remote wild areas through sound and sustainable economic development. To truly be successful, ecotour operators not only tread lightly but must also set limits upon their use of the land and its resources.” – Alaska Wildland Adventures, Our Environmental Commitment

“We want to adhere to our original intent of introducing people, in an intimate way, to one of the world’s greatest places, in the hopes that they too would feel that the area was worth conserving for the generations to come.” – The Boat Company, Why We Are and Eco Cruise Line?

“Ecotourism is a business concept that attempts to place a value on nature by providing services to tourists who appreciate nature. But ecotourism also has a conservation ethic. The three pillars that define ecotourism are: direct protection of a natural area by the ecotourism enterprise, education of the tourists about the value of ecotourism, and economic benefits of ecotourism activities must accrue to the local inhabitants. There are many successes, failures and works in progress and we still need to learn more as the projects evolve. But ecotourism is a direct way for people who want to preserve and protect nature to make a positive choice in their vacations and travels.” – Worldwide Ecotours, What is Ecotourism?

“Ecotourism as a concept has been greatly misunderstood and misused world over. It has been used to mean ‘green destinations’, and in some extreme instances ‘economic tourism’. Perhaps the most common error is the perception of it as an object, or place. It isn’t. It is a ‘means’ to more benefits from the environment accruing from responsible tourism practices.” – Ecotourism Kenya, Understanding Ecotourism

“Eco-tourism was a cul-de-sac, it was a mistake. It was about saying ‘we’ll green the tourism industry by focusing on 1 or 2% of it’. I still hear people today saying that eco tourism is the fastest growing sector of the tourism industry — it is these sort of awful myths that actually frustrate change,”
– Harold Goodwin, Eco-tourism ‘myth’ slammed 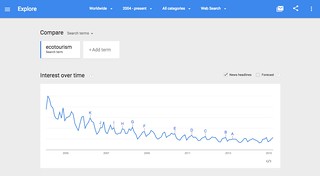 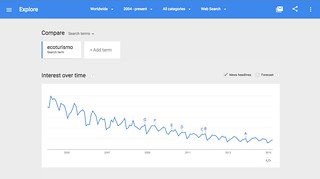 How has mainstream tourism been affected by ecotourism? #roofdog

We have seen relatively little adoption of ‘ecotourism’ in the past decade and many people think ‘ecotourism’ has reached its use-by-date.

Back in 2002 during the Quebec Ecotourism Summit Ron Mader asked Hector Ceballos-Lascurain, who coined the word ‘ecotourism’ if the word would exist in another ten years. What we’ve seen is a constant decline in the usage of ‘ecotourism’ (see chart below).

Recommended Listening
Shared Planet – Dec 2013 – Ecotourism
28 mins
Humans in the form of scientific research or for artistic endeavour have for centuries travelled the world in search of new landscapes and places. It was not until the arrival of cheap air travel in the 1970’s that far flung remote areas became accessible to anyone. Seeing and engaging with a wild landscape or animal has been shown to improve our desire to protect nature. But as the sheer numbers of people travelling to see wildlife spectacles increases, is it possible that the wildlife they have come to see may be changing their behaviour in response to this pressure. This week’s field report comes from a whale and dolphin watching trip in the Azores where tourist boats head off in search of a once in a lifetime wildlife spectacle.
http://downloads.bbc.co.uk/podcasts/radio4/nathistory/nathistory_20131210-1130a.mp3
http://www.bbc.co.uk/iplayer/episode/b03kqf02/Shared_Planet_EcoTourism