From the archives. First published in 1998

Carla and Herb Felsted are long-time friends and the publishers of the Mexican Meanderings newsletter. Subtitled “A Newsletter of Explorations in an Enchanted Land,” the bi-monthly journal explored off-the-beaten-path venues that attract the Felsteds’ combined love of Mexican history and culture. I caught up with the Felsteds as they were preparing their final issue and prepared this interview in 1998. 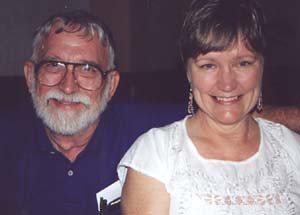 How long have you been visiting Mexico?

Herb first passed through Mexico in early 1957 on his way from Venezuela to Texas via the Pan-American Highway. He later lived and worked as a geologist in Coatzacoalcos, Veracruz from 1960 to 1962. We honeymooned in Mexico almost 25 years ago; it was Carla’s first trip there since early childhood. For the next several years we visited Mexico periodically, and have been regular visitors there for the past 14 years since Herb retired.

How did you get involved in writing about Mexico?

We once ran a Bed and Breakfast Inn near Austin. In speaking to our guests, we often encountered an abysmal lack of knowledge about our near neighbor to the south. Since we both traveled there frequently, people would ask us “You don’t drive in Mexico, do you?” or “Where else is there to go besides the beach?”

So we began our newsletter an effort to tell anyone who would listen or read that Mexico was a civilized country whose people had different but charming customs, and whose traditions and history was far older and more colorful than our own. From 1991-1996 we were contributors to Frommer’s Guides to Mexico, working with Marita Adair. It was an excellent way to get to know different parts of the country and to meet interesting and gracious people in the tourism business.

Would you tell me more about the origin and role of Mexican Meanderings?

Our newsletter shows the modern tourist that there are places worth visiting other than Cancun or Chapala and even the more visited places have a depth worth exploring. For example, Acapulco is a famous watering hole, but how many of its visitors know that for almost200 years the famous Manila galleons called Acapulco their home port? Who knows about Copala, a picturesque village of red-tiled roofs and brilliant bougainvillea, at the western end of one of the more spectacular — yet safe — mountain roads in this hemisphere and not far from Mazatlán? Or that chocolate comes from football-shaped pods? As we look back, launching the newsletter was an exercise in faith. We should have been terrified, but were full of enthusiasm.

We had an early Macintosh, and some experience in writing — Herb in the scientific field, while Carla had just finished editing a book in the social sciences. So we bought a word processing program and a cheap page layout program, found an inexpensive commercial printer who would accept the Mac format and went into business. We changed printers later after he printed an entire run without the header. Our initial mailing list was comprised of past guests at the B&B, plus an extensive list of newspaper and magazine travel editors. From an occasional review given us by one of the latter, we built a core subscriber list. However, in a list of our many talents, advertising is conspicuously absent. We spent a lot of money learning this.

At times very exciting!! At the outset we decided to be “co-editors,” and it has worked out pretty well. We have our own individual style, and concept of what and how we want to put something across. Usually we are not too far apart, for we share a common vision, but from time-to-time we have what we euphemistically term “editorial meetings.” We’ve never gone to bed angry, but occasionally bedtime has been quite late. Fortunately we share a good, if somewhat warped, sense of humor, and laugh a lot at both the world and ourselves. It has kept us “best of friends” for a quarter century.

As you approach the publication of issue 50 and look upon what you’ve written, what has surprised you most?

Mexico is such a timeless land that surprises are hard to come by. I have been pleasantly surprised over the last couple of years in upbeat encounters with officialdom. Others may dispute this, but personal experience has been good. Once, in Guadalajara, I (Herb) lost my tourist papers. As we planned to travel in the country for several more weeks, I presented my problem to the Immigration office on a Friday morning and was told to return the following Monday morning. Yeah, sure! But I did so and was presented with new papers — at no cost. Another was an encounter with a Federal trooper, who flagged me down for speeding (I had been!). He was courteous but firm about the danger of speed in urban areas, then smiled and wished us a pleasant, and safe, remainder of our trip. No hanky-panky, and again, no cost — this would have surprised me in the USA.

Carla continues to be intrigued by the diversity of the country; terrain, vegetation, climate, local customs, and regional treatments of the Spanish language. And we are both impressed by the ethnic pride amongst indigenous groups such as those living deep in the Sierra Tarahumara.

In other interviews you’ve been asked to name your “favorite place in Mexico,” and invariably you reply “Wherever we visited last.” Do you really love the entire country that much?

Yes, but we admit to having favorite spots — such as Barra de Navidad, Jalisco, a laid-back seaside village with mostly Mexican tourists, nice inexpensive small hotels, many good small restaurants, and friendly people. Then there is Jerez, Zacatecas, a relaxed mountain valley town with a small cadre of really wonderful English speakers — some of whom are Mexican — who meet for an informal coffee hour each morning, before checking their e-mail at the local cyber-cafe. On weekends, ranch hands ride into town on their horses to see what is going on. For short visits even San Miguel de Allende has its charm. It is justifiably in the recognized “colonial city” category, but has a distinctly Americanized undercurrent which makes us slightly uncomfortable.

Our most favorite place has to be Oaxaca. The city and its surrounding villages and ruins have a timeless character – invading cultures have not overcome, but have taken their place beside that which went before. We feel comfortable there – San Jose Mogote, Monte Albán and the Internet do not clash with each other. And once again, Mexican hospitality is so evident.

On the down side, there are a few places that we’ve been which do not call us back. Not that they are bad, or unpleasant – they just don’t touch the chord.

How do you use the Internet in your work?

Without the Internet, research would be very much more difficult. The accessibility of database references and the almost immediate response to queries is invaluable. Carla still works part-time as a librarian at Austin’s St. Edward’s University and includes the Internet in her presentations on research skills.

What exactly would you like to see on the Internet?

We would like to see more evaluative information about destinations. Accommodations and restaurants are noted, although most citations are promotional in nature and thus can be somewhat misleading. Also, a bit more cultural and historical information – not in excruciating detail, but “Why we ought to go there other than to swim or eat.

Will the internet change the role of guidebook writers and publishers?

Undoubtedly. Guidebooks should soon be appearing on the Internet. They should be an improvement over existing ones, as the traveler will expect it to be truly current. This will put a greater responsibility on both the writer and publisher. Today, hotel and restaurant data in even the most up-to-date printed guidebook is anywhere from one to three years out of date when it hits the newsstands. With the Internet, this is no longer acceptable.

In the near future, do you have any new projects?

We hope to have more of an Internet presence, perhaps a Web site or an electronic version of Mexican Meanderings. We are also investigating publishing one or more compilations of stories from our newsletter after we publish issue #50 (November/December) 1999.

Publisher’s note (2018): Herb passed away this year. Carla is conducting a Celebration of Life with family this weekend. I wrote this:

Back in 1994 I had returned to Austin, Texas to set up shop as a freelance environmental reporter covering the U.S./Mexico border. Back then I thought the newly hatched NAFTA would signal a broader and deeper interest in the US’ southern neighbor. Somehow I announced an informal meetup and there in attendance were Herb and Carla and everything ‘clicked’ in terms of friendship. We were of different ages and backgrounds but we shared this love of Mexico and travel in Mexico. Later meetups took place in Oaxaca for Day of the Dead, on a press trip to the Yucatán and a Tianguis Turistico or two in Acapulco. We reveled in our adventures and in the opportunities to share what we learned, what we ate and drank. Those were the days of learning how to prepare a proper paloma and how to distinguish and name some of the infinite ways to prepare a tortilla. We crafted what we learned into articles and stories, helping others discover Mexico that was simultaneously ancient and brand new. We gave travel tips and talked up locals. We reveled in these slow adventures. Herb and Carla shared compassion and curiosity and a willingness to make the place and local people the lead characters in their stories. Herb was always gracious without being meek. His sense of humor livened up conversations without him becoming a standup. As I recall these memories, I hear his voice and I hear his laughter, and I am more than grateful that our paths crossed.