If it is 4pm in Melbourne, what time is it elsewhere?

Surveyor Hoddle and how he shaped Melbourne – In 1837 a surveyor named Robert Hoddle was sent from Sydney to the mouth of the Yarra, charged with the duties of laying out what would become the city of Melbourne.

A forgotten war – A story from our colonial past that has everything: war, love, courage, freedom fighters … and the gallows. And it all takes place, more or less, in the heart of Melbourne, in 1842.

The Founding of Melbourne and the Conquest of Australia – Tasmanian historian James Boyce’s new book tells the story of the illegal squatters camp founded on the banks of the Yarra River in 1835, and how it sparked a frenzied land rush that transformed Australia and wiped out 80 percent of the local Aborigines.

By Design on a tram – Join Alan Saunders and the By Design team for a highly unusual forum celebrating the architecture and urban design of one of our greatest cities. Unusual because the venue for our forum is that quintessential Melbourne mode of transport, a tram: The City Circle tram to be exact. The City Circle tram passes some of the city’s major tourist attractions and some of its finest architecture and urban design.

Queenie, Choi and friends: 150 years at the Melbourne Zoo – This year marks the 150th anniversary of Melbourne Zoo in its location at Royal Park, part of the green ring which surrounds the city. Australia’s oldest zoo, the Royal Melbourne Zoological Gardens opened to the public in 1862, part of the city’s boom time grandiloquence, and a mark of its growing urban cosmopolitanism.

Conversation with Simon Sleight – Simon Sleight examines how the baby boom that resulted from the gold rushes of the 1850s created new urban spaces that changed the design of Melbourne streets.

The art of gleaning forbidden fruit – Director of the Melbourne Royal Botanic Gardens, Tim Entwisle, walks the back streets of inner-city Melbourne, finding out about street fruit.

Urban forest project has unexpected delightful consquences – Severe water restrictions have left the city’s urban forest in a state of decline and nearly 40% of trees are in decline or dying. So they came up with an idea. Each tree has been given its own email address and ID number on an interactive online map – the original intention was to help residents report tree decline, but instead people starting writing love emails to the trees.

Westography – documenting the fading ‘social landscape’ of the western and north-western suburbs of Melbourne and the western arc of country Victoria, Australia. 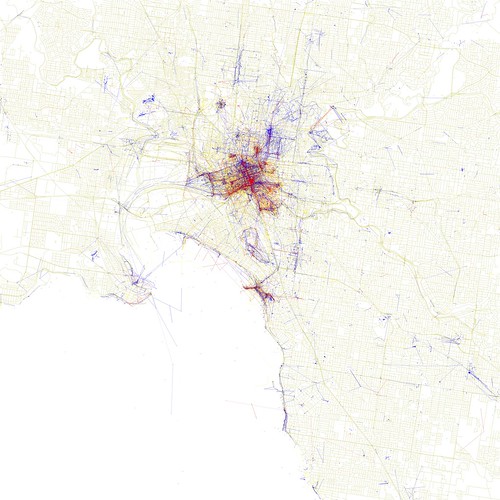 In May 2006 Great Parks for a Liveable City was announced with the Government committing $10.43 million to the planning and establishment of the first three new metropolitan parks in the growth corridors of Melbourne’s west and north – Merri Creek Parklands (Campbellfield/Thomastown), Toolern Creek Regional Park (Melton) and Werribee River Regional Park (Werribee). The first stages of each of the parks will be open to the community in mid 2010. The full realisation of the parks will take up to 20 years, depending on funding, rainfall and population growth in the surrounding areas. With Melbourne’s population expected to be 5 Million by 2030 the development of these parks will ensure that the park network grows to keep pace with the growing city.

Universities
Green Infrastructure Research Group. We are collaboration of scientists at the University of Melbourne studying how to maximise the benefits plants provide to urban environments. Urban Green infrastructure is the network of natural and designed vegetation within our cities and towns, in both public and private domains. It includes public parks, recreation areas, remnant vegetation, residential gardens and street trees, as well as innovative urban greening technologies such as green roofs, green walls and rain gardens. Broadly, our research seeks to understand the ecosystem service benefits provided by green infrastructure and the biodiversity that uses it as habitat. We have a significant research program developing green roofs and green facades for Australian cities but are also interested in how we can use green infrastructure to support and enhance urban biodiversity.
http://thegirg.org/

Dredging Port Phillip Bay
Supporters of channel deepening, including many in Victoria’s Government and business community, say the estimated $969 million project will boost exports and trade, but will the economic benefits be delivered with unacceptable environmental costs?

Transportation
SkyBus is a greener, easy way to travel. When you travel on SkyBus between Melbourne airport and the city you leave a smaller carbon footprint.

Southern Cross is the major railway station and transport hub of Melbourne and now has a fully operational site offering information about all services operating at its location.

Crafts
Handmade in Melbourne
If you are an artisan in need of a website, we can help. The team behind Handmade in Melbourne have created a cost-effective website solution, specifically crafted for the handmade world. The website connects you to your customers, enabling you to sell your products direct.

Melbourne Cup
The Melbourne Cup is Australia’s major thoroughbred horse race. Marketed as “the race that stops a nation”, it is a 3,200 metre race for three-year-olds and over. It is the richest “two-mile” handicap in the world, and one of the richest turf races.
Wikipedia
melbournecup.com

Passion for Plants: Nothing wants to be quite perpendicular in this picture, but that’s the way it is with these trees and this lawn. Looking towards Rose Pavilion from Hopetoun Lawn, in Melbourne Gardens yesterday. #staysafe… https://t.co/SFxtYugPmU , from @TimEntwisle pic.twitter.com/yDtY75nTLO