Having lived in the Centro, I’m a long-time fan of walking tours in this neighborhood. Our virtual trek begins again. We will be looking for the plaques on the next visit.

Blue Sky Thinking
Wish there were a podcast or podtour.

Reminders of centuries past emerge along Mexico City streets (from @AP) https://t.co/WH1oMAoSJJ

Prologue (Google Translate)
In 1928, under the aegis of José Vasconcelos, Luis González Obregón, Artemio de Valle-Arizpe and other chroniclers ordered to place in a few corners of the Historical Center a handful of tiles that recalled the old name of the streets. That group also left, in certain places, small plaques that recalled fundamental facts of the history of Mexico City: which was the first street that had street lighting or where the first brothels that existed in the sixteenth century were established? The metropolis.

The murder of Obregón and the political upheaval that followed interrupted the project, the first one that tried to return his memory to a city that was then four hundred years old.

In the time that followed, various cultural policies related to the rescue of urban memory were set in motion. None of them remained, none of them lasted. The tile plates, however, continued to make memory, illuminating the past of the city, and nine decades later they continue in the same place where the old chroniclers left them.

Our desire, then, is to continue with the process of regeneration of urban memory that was interrupted a century ago: to turn the city into a kind of living museum.

To this end, 200 places have been chosen where plaques will be placed to reveal to the walker the historical richness of the streets and buildings that surround it and, in this way, return the meaning to that forest that the carelessness of time becomes indecipherable.

The present vademecum is the guide of the one who walks in these directions, in such a way that in the identification of these monument-places (or places of memory as the French call him), in his footsteps resonate the music of the centuries that is the music of our history.

Quotes
No, Mexico City does not start at the National Palace,
Nor ends up on the Reforma Road. I give to you
my word that the city is much bigger.
– Manuel Gutiérrez Nájera, 1894 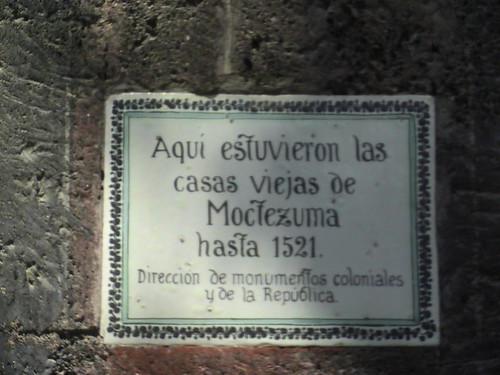