February 21 is International Mother Language Day declared by UNESCO in 1999 to celebrate linguistic and cultural diversity and multilingualism. Events, workshops and even tweets on this date promote awareness.

UNESCO: “Languages are the most powerful instruments of preserving and developing our tangible and intangible heritage. All moves to promote the dissemination of mother tongues will serve not only to encourage linguistic diversity and multilingual education but also to develop fuller awareness of linguistic and cultural traditions throughout the world and to inspire solidarity based on understanding, tolerance and dialogue.”

We are fans of the #UsaTuVoz and Dizhsa Nabani initiatives in Oaxaca, Mexico. There is a veritable renaissance of recognition of Indigenous culture in this southern Mexican state starting with language.

We have paid special attention to this celebration for years and challenge readers to translate ‘International Mother Language’ to other languages. 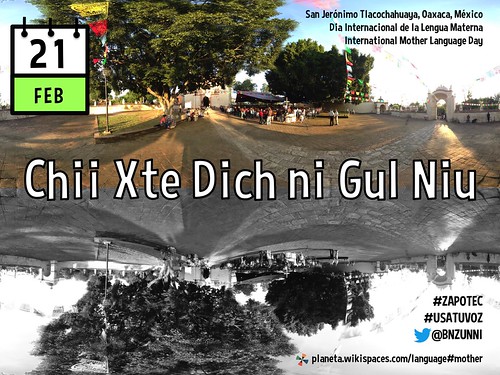 History
International Mother Language Day has been observed every year since February 2000 to promote linguistic and cultural diversity and multilingualism. The date represents the day in 1952 when students demonstrating for recognition of their language, Bangla, as one of the two national languages of the then Pakistan, were shot and killed by police in Dhaka, the capital of what is now Bangladesh.

Question: Why Mother Language Day, not Father Language Day?
Mary S. Linn, curator of cultural and linguistic revitalization, Smithsonian Folklife: When linguists first started describing language relationships in terms of familial relationships, mothers and grandmothers were the primary caregivers of children, and children learn their first languages in the home. Thus, you learned, generally, your first language(s) from your mother.