Ocmulgee National Monument preserves traces of over ten millennia of Southeastern Native American culture, including major earthworks built more than 1,000 years ago by the South Appalachian Mississippian culture (a regional variation of the Mississippian culture.) These include the Great Temple and other ceremonial mounds, a burial mound, and defensive trenches. They represented highly skilled engineering techniques and soil knowledge, and the organization of many laborers. The site has evidence of “17,000 years of continuous human habitation.” The 702-acre (2.84 km2) park is located on the east bank of the Ocmulgee River. Present-day Macon, Georgia developed around the site after the United States built Fort Benjamin Hawkins nearby in 1806.

Varying cultures of Indigenous peoples settled on what is called the Macon Plateau at the Fall Line, where the rolling hills of the Piedmont met the Atlantic Coastal Plain. The monument designation includes the Lamar Mounds and Village Site, located downriver about three miles (5 km) from Macon. The monument park was designated for federal protection by the National Park Service (NPS) in 1934.

Park advocates and the city of Macon have been fighting for years to expand Ocmulgee National Monument — home to massive earthworks & thousands of years of Native American history. Thanks to a bipartisan victory in Congress, it's about to happen. https://t.co/cdNwV7GLbi 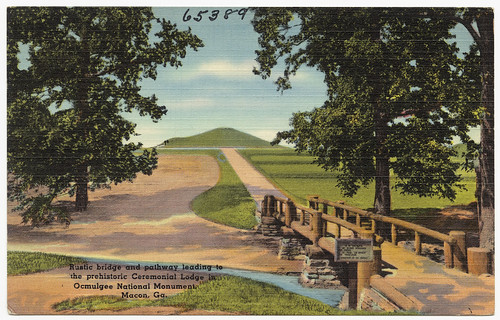