Spotlight on the World Heritage Site El Tajín, located in the state of Veracruz.

El Tajin was at its height from the early 9th to the early 13th century. It became the most important center in north-east Mesoamerica after the fall of the Teotihuacan Empire. Its cultural influence extended all along the Gulf and penetrated into the Maya region and the high plateau of central Mexico. Its architecture, which is unique in Mesoamerica, is characterized by elaborate carved reliefs on the columns and frieze.

World Heritage
El Tajín, named after the Totonac rain god, was named a World Heritage site in 1992, due to its cultural importance and its architecture.

Formerly it was thought that through the ball game the movement of the cosmos could be altered and influence the decision of the gods, seeking benefits for the community in general. Tajín is known for being the second Mesoamerican city with the largest number of courts for the ball game, so far 17 have been identified, taking into account the above, Tajín is a great shrine where the ball flew from one side to another looking for favors divine.

Through a journey through the history of the ruler 13 rabbit and the explorations in this ancient Mesoamerican city told in the voice of its protagonists and through Juan Villoro’s chronicle, we travel in the feathered serpent to the very center of the cosmos and look for movement of the divine ball in Tajín, the city of lightning. 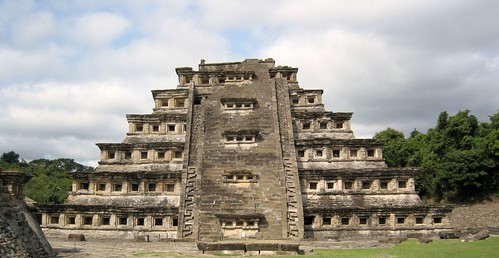