Las Vegas – The Neon Museum is one of our local faves downtown and one of the world’s best displays of beautiful, memorable and often illuminated signage. No joke. April 1, 2020 a virtual tour streams live on Twitter of the Lost Vegas installation by Tim Burton at 130pm Pacific. #NeonBoneyard

In a city known for constantly reimagining itself and imploding buildings, the #NeonMuseum — dedicated to preserving iconic signs of #LasVegas — is planning an ambitious expansion and a rare exhibit by movie director #TimBurton https://t.co/j9pjqM0FHS

About the museum
Neonmuseum.org – The Neon Museum officially “opened” with the installation of its first restored sign, the Hacienda Horse and Rider, at the intersection of Las Vegas Boulevard and Fremont Street.

In 2012 the Neon Museum Boneyard opened at 770 Las Vegas Boulevard North. The nearly two-acre campus includes an outdoor exhibition space, known as the Boneyard, which features more than 200 signs, 11 of which are restored, a visitors’ center housed inside the former La Concha Motel lobby and the Neon Boneyard North Gallery which houses additional rescued signs and is used for weddings, special events, photo shoots and educational programs. The gallery includes the Lucky Cuss Motel, the Bow & Arrow Motel, The Silver Slipper, Society Cleaners, Binion’s Horseshoe, the Normandie Motel, the Hacienda horse and rider, the Landmark and 5th Street Liquors.

Nevadafilm.com: Each of the historic neon signs have either been donated to the museum or loaned by individuals, casinos, and other businesses. They serve as a unique way of exploring the arts and cultural history of Las Vegas over the past several decades, as well as technological advances made to improve the electrical design of the signs over time. Collectively, the signs also serve as a commemorative, nostalgic experience for visitors worldwide who may remember the historic signs when they were originally on display many years ago.

The Neon Boneyard was formerly known as the YESCO (Young Electric Sign Company) Boneyard. YESCO, a company that designs and manufactures electric signs, was originally founded in 1920 in Utah, but a Las Vegas branch was opened in 1933. As casinos were demolished or signs replaced, many of the old signage found a home at the Boneyard, and in 1996, the Neon Museum was founded. YESCO donated many of the retired signs to the museum to help with the preservation and study of these iconic Las Vegas artifacts, and tours of the Boneyard were given by appointment only.

You may be called the Ugly Duckling but we know ugly is the new cute. Slay duck slay 👑🦆 #NationalComplimentDay #NeonMuseum #UglyDuckling #Slay pic.twitter.com/JDQtNST8KD

2017 – The Neon Museum celebrated its fifth birthday with a the Day of the Dead fiesta with free self-guided access to the Neon Boneyard.

On display: an altar created by artist Favela in memory of prominent sign designer Raul Rodriguez, who designed the Flamingo sign that resides in the Boneyard and he earned national recognition for his Rose Parade float designs. 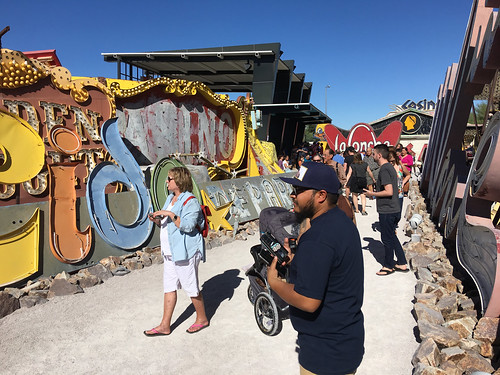 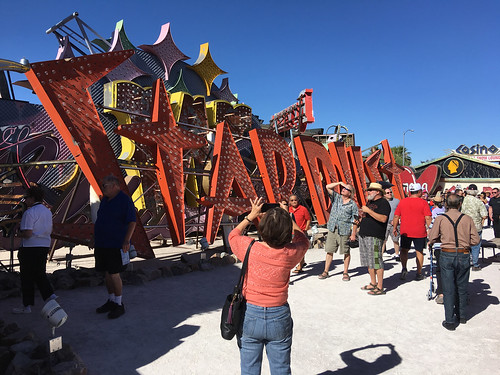 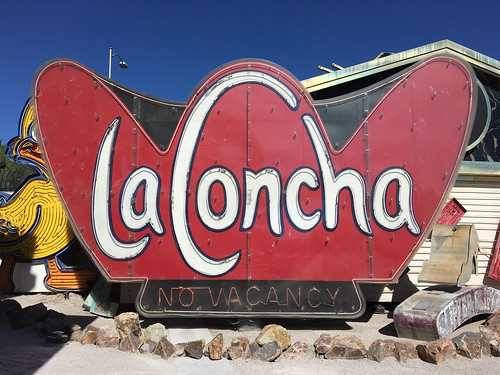