Victoria Falls (Lozi: Mosi-oa-Tunya, “The Smoke That Thunders”) is a waterfall in southern Africa on the Zambezi River at the border between Zambia and Zimbabwe.

Background
On either side of the Zambezi River in southern Zambia and northwestern Zimbabwe. Mosi-oaTunya National Park follows the left bank between the Sinde River and the Songwe Gorge, bounded on the north by Dambwa Forest Reserve and the town of Maramba (formerly Livingstone). On the right bank Victoria Falls National Park is bounded by the river from 6km above to 12km below the falls and by the town of Victoria Falls on the west. A riverine strip of Zambezi National Park extending 9km west along the right bank of the Zambezi and islands in the river are all within the Park as far as Palm and Kandahar Islands. 17°55’S, 25°50’E. (Source)

History
1931: The south side of the river declared a Game Reserve;
1937: The falls created a Special Area, managed by the Victoria Falls Executive Committee which permitted the development of a power station at the falls;
1948: The National Monuments Commission established a Victoria Falls Conservancy Committee and extended the protected area on the north side of the river downstream to Songwe Gorge, legally confirmed in 1949;
1952: The Victoria Falls National Park formed from the Game Reserve and the Special Area. A Trust was formed and made responsible for the Park;
1972: The National Park established. It falls under Zambia’s National Parks Wildlife Act of 1968 and Zimbabwe’s Parks and Wildlife Act of 1975. 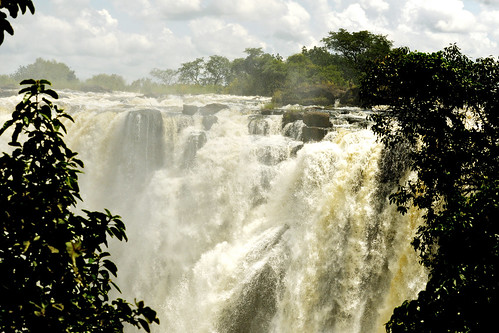 Having a good time with the Republican President of Zambia, Dr. Edger C.Lungu at the Victoria Falls World Heritage Property. pic.twitter.com/UhiuE0OSlS