Trees
Kereru
are the only remaining species able to disperse the large seeds of forest trees.
Kereru in Wellington
http://www.kererudiscovery.org.nz

The Pohutukawa, (Metrosideros excelsa), is known as the New Zealand Christmas tree, as it flares into crimson display from late October until end November and into the Christmas holiday season.
http://www.nzhistory.net.nz/media/photo/pohutukawa-flowers

Because Kauri don't play any part in the magnificence of the ranges and people don't go walking through them to enjoy the trees? 🤔 pic.twitter.com/orhB5ScBPj

Ferns
The silver fern – prehistoric vegetation from the time of Gondwanaland – is the national symbol.
Cyathea_dealbata
http://blog.tepapa.govt.nz/2014/05/02/science-live-is-it-a-fern

Herbs
kawakawa
Kakabeak/kowhai ngutukaka is a shrub found only in New Zealand. It is a member of the pea family
http://www.doc.govt.nz/conservation/native-plants/kakabeak

Waipoua Forest
Waipoua Forest Trust is a bicultural partnership between conservationists and Te Iwi O Te Roroa whose vision is to protect, restore, interpret and promote the internationally significant natural heritage at Waipoua.

Waipoua Forest in Northland is New Zealand’s largest sub-tropical rainforest; a unique environment with giant trees up to 3,000 years old at the centre of its ecology; an environment rich in biodiversity in which endangered species flourish. If you volunteer to help us on a working holiday, you will be contributing to a history of conservation going back to 1952.

Footprints Waipoua Crossings Hokianga: “Have you ever noticed how don’t have lower branches on their trunk area? What the lower trunk does have though are a lot of divits. shed their lower branches in a process known as Abscission (from the Latin ab meaning away and scindere meaning to cut) so vines can’t cling to or climb the trunk and they convert that energy they would have used to grow a limb into overall tree height, and punch for the Crown Canopy. Interesting to note, when abscise their lower branches, the branch takes the knot with it, hence the divits. Their majestic trunks made them ideal for masts on ships, which was a big contributor as to why they were plundered to near extinction.”

FYI: The Māori name for the silver fern that appears on the All Blacks jersey is the Ponga, aka Cyathea dealbata.

Conservation Week gives you the opportunity to celebrate the natural environment and make a connection with your local special places. There are heaps of special places in New Zealand that you can visit all year round with your family and friends.

Resources
Get English and Te Reo Māori posters
Find Conservation Week posters to print at home, or for commercial printers. Both English and Te reo Māori versions are available in a range of sizes.

The 2016-2020 Action Plan showcases some of the significant national actions being undertaken through the combined efforts of central and local government, whānau, hapū, iwi, resource managers, communities, private landowners and businesses. 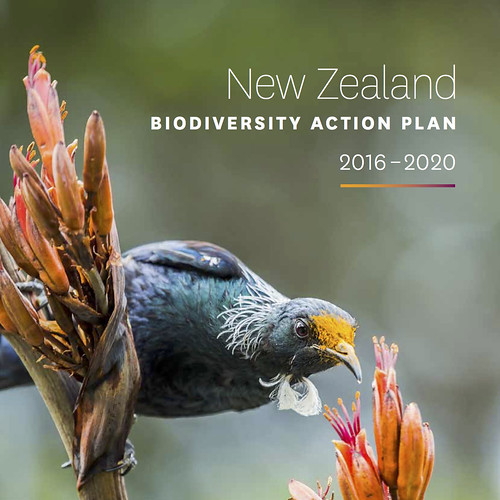 Our Waters in Common is a movie exploring the state of our Tasman environment.

The film examines the amazing things that rivers provide us, the issues they face, and how communities and agencies are working together to improve them.

Riding on the back of a big water quality reporting effort, the movie was a year in the making and was helped by a huge volunteer effort.

The beauty and diversity of the district’s rivers shines through and the stories of so many good people working to improve our rivers’ health are warmly and poignantly portrayed.

With such a wonderful community in Tasman looking after our rivers, it is hard not to be encouraged. While you are bound to learn lots, the film presents the information in a very engaging and easily-understood way. 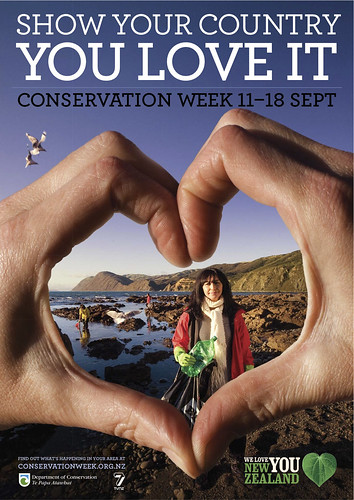 Critter Of The Week – Nicola Toki – Our Critter Of The Week, isn’t a critter at all. It’s the Parapara tree, also known as the bird-catching tree. It catches insects, birds, and even more birds who come in to catch the little birds caught in it. It’s like Roald Dahl’s The Twits!

Restoring the Dawn Chorus at Windy Hill Sanctuary – From small beginnings in 1999, a consortium of private land-owners in southern Great Barrier Island is making a big ecological impact on their land.
http://www.naturespace.org.nz/groups/windy-hill-rosalie-bay-catchment-trust
http://www.sanctuariesnz.org/projects/windyhill.asp
@AlisonBallance @RNZ_Science

Island lifeboats for New Zealand’s birds and reptiles – When humans first set foot in New Zealand almost a thousand years ago, they encountered a rich fauna of reptiles and flightless birds. These first human visitors, and visitors and settlers since brought with them rats, cats, mice, rabbits and stoats which feasted on the local fauna, or degraded the environment, driving many original species to extinction. But luckily, a few small offshore islands remain undisturbed. Now scientists are using these islands as ecological lifeboats, as a source supplying birds and reptiles back to the mainland. Matthew Crawford reports for The Science Show.

Protecting the environmental and cultural heritage on the North Island
Wetlands in around Hamilton are under threat with more than 3000 dairy farms having a significant impact on water quality according to the latest State of the Environment report.

A Life Worth Having – In November 2014, a forum called A Place to Live : for the life worth having in Whanganui focussed on the link between economic and environmental health in New Zealand, in particular in the regions and smaller centres.

Listen to this programme
Spectrum for 13 May 2012 (duration:26′10″)
Download: Ogg Vorbis MP3 | Embed
The distinctive vomit-like smell of ripe fruit from a Ginkgo tree is enough to put most people off harvesting it. But each Autumn, members of the Asian community can be seen shaking the leaves of trees, particularly around Tauranga, to encourage the Ginkgo bilba fruit to fall to the ground. The fruit is highly prized for its medicinal purposes and the nuts inside are considered an important food delicacy in Japan, Taiwan and other parts of South-East Asia.

Nga Uruoara – As tribute to the noted New Zealand botanist and eco-historian Geoff Park who died in 2009, Radio New Zealand National is featuring his 6-part radio series Paralleling his 1995 book Nga Uruora – The Groves of Life Ecology and History in a New Zealand Landscape.

Te Ahi Ka (Sep 25 2011)
Ethnobotany is the science that looks at the relationships between people and plants and if there is a single body of work that encapsulates that within New Zealand, it is the groundbreaking Waitangi Tribunal Claim Wai 262 also known as the Flora and Fauna Claim. Saana Murray (1926 – 2011) will always be associated with the claim that took 20 years to complete. In Te Ahi Kaa, three years before her and five others were to create a historical precedent we have an archival recording of her speaking at the Ethnobotany N<ga mahi Māori o Te Wao nui a Tane hui held at Rehua Marae, Christchurch

Individual Episodes
Nga Uruora Part 1: The Immense Trees of OoahaourageEcologist Geoff Park examines the impact of European agriculture on the Hauraki Plains country, once the site of the richest pre-colonial Maori culture. It’s also where the country’s future landscape was shaped. (duration: 54′44″)
Nga Uruora Part 2: The Perfect ValePetone foreshore was the ‘beachhead’ of the New Zealand Company who had arrived expecting to find tens of thousands of acres of flat land suitable for agriculture. Settlers were to be bitterly disappointed. (duration: 55′41″)
Nga Uruora Part 3: The RiverbendEcologist Geoff Park goes in search of the reason why a small stand of ancient Kahikatea trees on a bend of the Mokau River has survived, despite the onslaught of forest-clearing and dairying. (duration: 54′29″)
Nga Uruora Part 4: The Lake in the Sand CountryPapaitonga is the name that Sir Walter Buller gave to his country estate. It was his site for a ‘grand theatre’ of Maori artefacts, and also the place where the philosophy of modern conservation was formed. (duration: 54′23″)
Nga Uruora Part 5: The Sandplain ForestThe continued existence of the fragile Nikau Scenic Reserve near Paparoa is an anomaly amidst the dairy country. As it turns out, it’s survival is linked to the story of the Western Black Petrel. (duration: 53′27″)
Nga Uruora Part 6: Necessary ProtectionWhat significance should be placed on a few surviving remnants of the pre-agricultural landscape of Aoteraoa, and what would Joseph Banks made of his ‘properest place for a colony…’? (duration: 54′27″)

Our Changing World – Discovering prehistoric New Zealand
A research programme at the University of Otago is forcing a re-think about the impact of early Maori on our fauna, especially coastal species. Alison Ballance is at Dunedin’s Sandfly Bay with zoologist Jon Waters and PhD student Catherine Collins. It seems prehistoric Otago was home to different kinds of penguins and sea lions from those present now.

Ecosystems
New Zealand can be divided into nine ecoregions: http://tr.im/Newe

The Kermadec region is significant to New Zealand and the world, providing an important safe haven for threatened species and an underwater frontier that scientists are only now beginning to explore. Pew and its partners are calling for a large scale, fully protected marine reserve around the Kermadecs. If the entire region were to be protected, at 620,000 square kilometers it would be one of the largest marine reserves in the world. – http://www.pewtrusts.org/en/projects/global-ocean-legacy-kermadec
@thekermadecs
http://www.bbc.com/news/world-asia-34387945
http://www.beehive.govt.nz/release/pm-announces-kermadec-ocean-sanctuary
http://mfe.govt.nz/marine/kermadec-ocean-sanctuary
http://www.doc.govt.nz/parks-and-recreation/places-to-go/auckland/places/kermadec-islands
http://www.nzherald.co.nz/news/article.cfm?c_id=1&objectid=11520435
http://www.stuff.co.nz/national/politics/72497269/john-key-to-announce-one-of-the-worlds-largest-ocean-sanctuaries
http://www.pewtrusts.org/en/about/news-room/press-releases/2015/09/28/pew-praises-new-zealands-announcement-of-kermadecs-marine-sanctuary
Hashtag: Kermadec

Te Urewera National Park
Te Urewera National Park is the largest single block of native forest in New Zealand’s north island. Established in 1954 the park covers 212,600 hectares and contains more than 650 different native plant species. This is the fourth largest national park in New Zealand, and the largest in the North Island, covering 212,673 hectares.
largest rainforest on the North Island

Te Urewera National Park lies between the Bay of Plenty and Hawke’s Bay in the North Island. The nearest towns are Whakatane, Murupara and Wairoa.

Established in 1887, Tongariro was the first national park in New Zealand and the fourth in the world. It is also a dual World Heritage area, a status which recognizes the park’s important Maori cultural and spiritual associations as well as its outstanding volcanic features.

Fauna
Before human influence, New Zealand’s only land mammals were two species of bats. Small populations of both these species remain in Puketi and require protection.

Kiwi are flightless birds endemic to New Zealand, in the genus Apteryx and family Apterygidae.
Kiwi

Penguins: Yellow Eyed Penguins (Hoiho) are native New Zealand penguins that can be found on the coast of Dunedin in Otago Peninsula.

Shellfish
Paphies ventricosa, or toheroa in the Māori language, is a large bivalve mollusc of the family Mesodesmatidae, endemic to New Zealand.

Paua or pāua is the Māori name given to three species of large edible sea snails, marine gastropod molluscs which belong to the family Haliotidae (there is only genus Haliotis), known in the USA as abalone.

The New Zealand Conservation Authority is:

Quotes
Last year New Zealand honoured the United Nations Year of Biodiversity with the revelation that we are among the world’s worst biodiversity losers We have 2788 species listed as threatened with extinction. Worse still is the reality that if more funding were available for further investigation, the species now classified as “data limited” would likely be listed as threatened and double the number on that list. The historical reasons for this biodiversity tragedy are unmistakable. We drained 90 per cent of our wetlands, removed over 70 percent of our native forests and dammed, straightened, stop-banked and engineered most rivers.
– Mike Joy, The dying myth of a clean, green Aotearoa

Expedition travel company Heritage Expeditions was born in the mid-1980s out of the belief that New Zealand’s precious birdlife must be protected for future generations. In his early working life, founder Rodney Russ was instrumental in the conservation of many birds on New Zealand’s endangered species list including the Campbell Island flightless teal, kākāpō and the black robin. The Christchurch-based, family-owned company he founded remains true to his passion and commitment to conservation. This December, a special fundraising voyage to New Zealand’s Subantarctic Islands will be run as part of Heritage Expeditions’ longstanding partnership with Forest & Bird. Heritage Expeditions is pleased to extend this support to Forest & Bird as sponsor for Bird of the Year in 2015. – See more at: birdoftheyear.org.nz